I’m more and more becoming a fan of Dan Savage. He’s one of these guys, who constantly manage to point out the nuisance of religion, without being a total dick about it.

That may be, because instead of just weighing in on abstract, philosophical questions, he actually does something good for society. He’s an LGBT activist and initiator of the It Gets Better Project, an organization that helps prevent suicide among young people with “non-traditional” sexuality. Also, he is the guy who brought us Santorum.

Last night, Dan Savage was on Bill Maher’s show, and the two were talking about the recent legalization of gay marriage in Hawaii:

Maher:
Their catholic bishop there […] says something about how children who are […] adopted by gay parents have a greater chance of committing suicide. That must be bullshit, right? 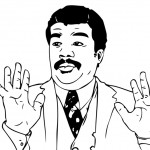 Savage:
I hate to always go there, but they don’t have moral high-ground when they talk about the welfare and safety of children. They just don’t! They have squandered that on the tips of their dicks.